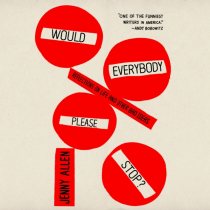 &quoteOne of the funniest writers in America.&quote That's what The New Yorker's Andy Borowitz calls Jenny Allen-and with good reason. In her debut essay collection, the longtime humorist and performer declares no subject too sacred, no boundary impassable.With her eagle eye for the absurd and hilarious, Allen reports from the potholes midway through life's journey. One moment she's flirting sha… melessly-and unsuccessfully-with a younger man at a wedding; the next she's stumbling upon X-rated images on her daughter's computer. She ponders the connection between her ex-husband's questions about the location of their silverware, and the divorce that came a year later. While undergoing chemotherapy, she experiments with being a &quotewig person.&quote And she considers those perplexing questions that we never pause to ask: Why do people say &quoteIt is what it is&quote? What's the point of fat-free half-and-half ? And haven't we heard enough about memes?Jenny Allen's musings range fluidly from the personal to the philosophical. She writes with the familiarity of someone telling a dinner party anecdote, forgoing decorum for candor and comedy. To listen to Would Everybody Please Stop? is to experience life with imaginative and incisive humor.