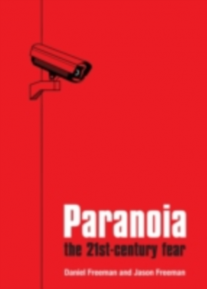 Are we living in a uniquely paranoid age? Catalysed by the threat of terrorism, fears about others have reached a new intensity. The roll call of apparent dangers seems to increase by the day: muggers, child abductors, drug dealers, hoodied teenagers. Crime has apparently reached such high levels that CCTV cameras are required in every town centre, and parents are so fearful that many children nev… er go out alone. Until recently, no one suspected just how common paranoia was. But new research suggests that around a quarter of us have regular paranoid thoughts, and probably lots more have them occasionally. Paranoia is so prevalent that there's a very good chance that all of us will, at some point in our lives, be among the 25%. Yet, although paranoia is as common as depression or anxiety, most of us know almost nothing about it. What is paranoia? What causes it? Are some people more prone to paranoia than others? Are we more paranoid now than we used to be? How should we deal with our paranoid thoughts? And how can we reduce the amount of paranoia in our society? Co-written by one of the world's leading psychologists of paranoia, and drawing on the latest scientific research, this lively and accessible bookanswers these key questions, highlighting for the first time the central role of paranoia in our world today.

Other eBooks releases by Daniel Freeman