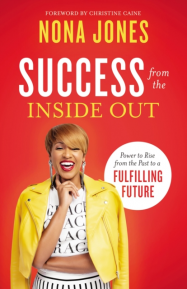 In Success from the Inside Out, corporate executive and leadership speaker Nona Jones takes you on a personal journey to discovering the difference between success that empties, and success that fills. Many of us aspire to achieve position, wealth, and notability in the hopes that those things will erase the pain of the past. But for those like Nona Jones who have experienced trauma, success requi… res more than a changed mindset--it requires repairing a broken spirit.Nona was appointed to an executive role with a Fortune 100 company at only 23 years old. Since then, she has led award-winning initiatives in public affairs, brokered multi-million dollar business deals, addressed the United Nations, and championed juvenile justice and education policy reform in the halls of Congress--all under the age of 35.Then in one of the largest wake-up moments of her life, Nona realized that her past battles were waging a present war. Though she tried to push away the memories, her childhood trauma continued to affect her emotionally, spiritually, mentally, and physically--until she made a pivotal decision.Success from the Inside Out charts the course of Nona's breakthrough--a course that can also lead you out of the storms of your past or present. Through her own remarkable story and insights, Nona helps you:Claim victory at the place where the defeat happenedRecognize ways you use work to cover up inward brokennessStill the voices in your head that say you aren't good enoughChoose not just empty success but fulfilling successMap your mile-markers toward your biggest goalsPush through from brokenness to breakthroughAs Nona writes, &quoteI've discovered that the only thing stronger than the power trauma has to change you is the power you reclaim when you acknowledge its effect on you.&quote Success from the Inside Out is an empowering guide to finding healing from the past so you can move with freedom and hope into the future.

Other eBooks releases by Nona Jones