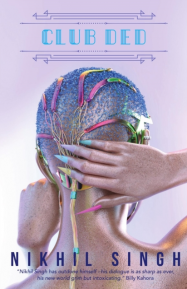 Club Ded is an exhilarating psychedelic-noir, the second novel from Nikhil Singh, author of Taty Went West, which was shortlisted for Best African Novel at the inaugural Nommo Awards.Brick Bryson, iconic African-American 90s action star, is fresh out of rehab and shooting the doomed sci-fi blockbuster CLUB DED with his old drinking buddy, bad boy, #metoo'd director, Croeser, in South Africa. But a… ll is not as it seems.Behind the scenes, operatives of Oracle Inc., an elite, all-female information gathering organisation, have gone rogue. Utilising their vast criminal resources, they're pushing the interests of a street-level psychedelic drug-cult - spearheaded by the mysterious ex-Nollywood director Fortunato, and his underground ';reality- revolutionaries'. As the subtropical, fish-derived drug begins to exert an apocalyptic influence in secret, the fabric of time itself begins to unravel.Set in Cape Town, Club Ded expands the Afrofuturist genre while it is still being formed, focusing on the methodology of creation in the media world of the city.';Nikhil Singh is the compelling, razor sharp and hallucinogenic voice of nascent and imminent African futures. In Club Ded, he rides a wild and filmic dialectic between America and Africa, all handled with scabrous surety and emotional force. Nikhil is a writer to be experienced, not just read.'Nick Wood, author of Azanian Bridges and Learning Monkey and Crocodile ';Club Ded is a laugh out loud riot. And yet each staccato chapter retains a gravitas that builds and builds to provide a Pynchonesque future vision of South Africa and the larger African continent with its aging action movie star, neurotic film director, beautiful sirens, paparazzi, charismatic wanderers, talking chimps and alien creatures. Nikhil Singh has outdone himself with this new novel - his dialogue is as sharp as ever, his new world grim but intoxicating. Club Ded is so f...d up, so hilarious and so brilliant.'Billy Kahora, Former Editor, Kwani? and author of The Cape Cod Bicycle War

Other eBooks releases by Nikhil Singh