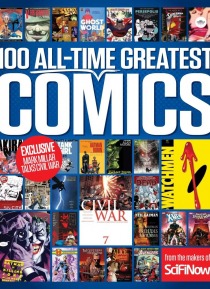 The comic book industry has come into its own in recent years, with the limelight being shed onto it from the film industry, but it's not all about superheroes in tights and in the 100 All-Time Greatest Comics, we celebrate the best titles from all walks of comic life including an X-clusive interview with Chris Claremont as he talks his tenure on X-Men. Featuring: 100 Greatest Comics - Explore th… e 100 best comics out there X-clusive creator interview - Find out what Chris Claremont has to say about 'The Claremont Woman' Breaking into comic books - Kieron Gillen talks about how he got into comics Home of the Brave - How Captain America has stood the test of time