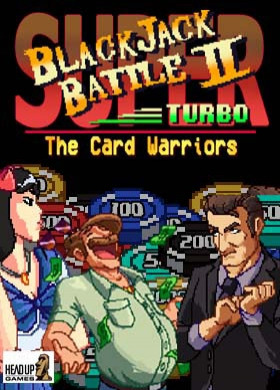 NOTICE: Activation key must be used on a valid Steam account, requires internet connection. ABOUT THE GAME Super Blackjack Battle II Turbo Edition introduces a roster of 12 very different characters all competing to become the greatest Blackjack player of all time. Following an invitation by the owner of the largest Casino in Las Vegas and Godfather of the local most influential crim… e family, each character will face the other participants in a face-off game of cards. Only the best of them will fly to Vegas to challenge the Godfather himself in a final match, not knowing that the tournament itself is nothing more than a charade to hide a ruthless master plan to defeat the competing clan family... KEY FEATURES So what's the deal with this game? It's Blackjack! It tributes to a well-known arcade fighting game from the '90s A rooster with 12 characters from all around the World such as Mark, an undercover FBI Agent, Kamiko from Japan, seeking revenge for her Uncles death or Gregor, a South African warlord Ten different story lines with individual endings and dialogues in an epic Single player campaign Up to four-player online matches where people can freely drop in and out Ranked online PvP mode with online leaderboards Cross-platform online multiplayer for up to four players (once we have released the game to the other systems) SYSTEM REQUIREMENTS Minimum: OS: Windows Vista / 7 / 8 / 10 Processor: Intel i3 or AMD equivalent Memory: 512 MB RAM Graphics: Non-Dedicated (shared) video card with at least 512MB Shared VRAM Storage: 1200 MB available space

Other game releases by Headup