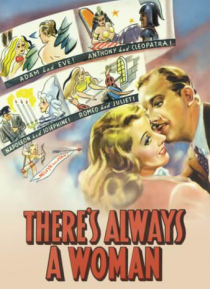 William Reardon (Academy Award® winner Melvyn Douglas, 1979, Best Supporting Actor, Being There) leaves his cushy job with the District Attorney to open up a private detective agency. But when things get tough, he goes back to the D.A. office, leaving his wife Sally (Academy Award® nominee Joan Blondell, 1951, Best Supporting Actress, The Blue Veil) to close up the agency. When a woman comes in … with what seems like an easy case, Sally takes it on herself, trailing the woman who may be cheating with the client's husband. When the client's husband is found murdered, however, Sally tries to solve the case on her own, while William tries to solve it for the D.A. THERE'S ALWAYS A WOMAN is a zany comedy with brilliant chemistry from the two leads. Newly remastered.